The three-storey stone tower which lies in Johnstone Castle housing estate is one of the few surviving castles in Renfrewshire. It is also the most confusing. To understand it, we need to ignore modern place names and go back 400 years to two estates, Johnstone and Cochrane, one on each side of the Black Cart Water.

The second estate lies on the south side of the Black Cart, in the Abbey Parish, known as Cochrane Estate. In the early 1500s, Cochrane was split into Easter and Wester Cochrane. The part of interest to us is Easter Cochrane, which included the lands of Quarrelton, Hag, Greenend and Cartside. At its heart was a tower house called Easter Cochrane. By the late seventeenth century, Easter Cochrane was owned by an old Renfrewshire family, the Porterfields, who sold it to the Houstons of Johnstone. This made the Houstons owners of estates on both sides of the Black Cart in this area. In 1730 ‘Old’ Johnstone was purchased by McDowall of Castle Semple, on behalf of his friend James Milliken, a sugar planter about to return from the Caribbean. On his return, Milliken demolished the old castle of Johnstone, building Milliken House nearby, and renaming the lands north of the Cart as Milliken Estate, after himself.

The earliest sketch of Easter Cochrane tower was on Pont’s survey of the 1580s. By the 1730s, John Watt showed it as a central tower with two wings, a walled garden to the rear, and a long tree lined avenue heading north. To the south was the steading or fermtoun of Quarrelton. The tower was surrounded by coal and lime pits, and a reservoir on the Craigbog Burn, which powered a water powered engine to drain the mines. By the 1770s, Houston had converted this engine from water to steam power and the reservoir became an ornamental pond, then disappeared.

The house was altered and extended several times, including alterations in 1812 possibly by architect James Gillespie Graham. By the Victorian period, the old tower had turned into a grand castellated mansion, which retained the ‘Johnstone Castle’ name. The surrounding area became landscaped parkland, with only the numerous old coal pits to hint at the source of Houston’s wealth. Careful study of surviving photos of the mansion reveals the old tower still embedded in its heart. By the 1940s, the castle was in the centre of an army camp, surrounded by rows of corrugated huts. The camp had various uses, initially holding Polish soldiers, then as a prison of war camp, and finally as housing for returning British servicemen. By the 1950s the mansion was in ruins and demolished. The part comprising the old tower was saved, leaving it as it stands today, but with the ‘wrong’ name.

The story doesn’t end with this tower. A short distance to the west stands a prominent hillock, ringed by old estate paths, now hidden by woods. In the 1730s this mound was named ‘Castle Hill’ – perhaps the predecessor of Johnstone Castle, alias Easter Cochrane? 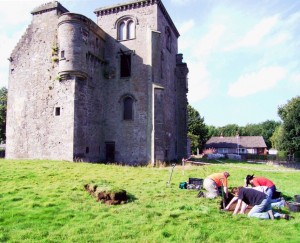