Lime has been used since early times for mortar, harling and plaster. From the second half of the 18th century, as advances were made in agriculture, lime was also in great demand as a fertiliser. The land around Howwood and Corseford contained seams of coal and lime. This provided the raw materials needed for the lime industry.

A partnership between the Houstons of Johnstone and McDowalls of Castle Semple established large scale lime works at Corseford in 1775. This important site had a limestone quarry and adjacent coal mines. Two types of limekilns – clamp kilns and draw kilns – were used in the West of Scotland at this time. The Houstons’ lime works favoured clamp kilns as these were more economical to build. A clamp kiln was simply a u-shaped hollow dug into the hillside. Alternate layers of lime and coal were kept burning together in the clamp kilns for about two weeks to produce powdered lime. Lime works operated at Corseford for over one hundred years until 1886, when the Corseford Coal and Limestone Pits closed. 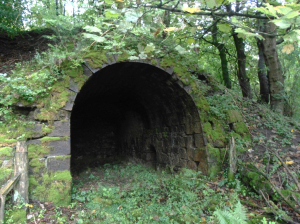 The other type of kiln, the draw kiln, was a substantial stone built structure. Although draw kilns were common in Renfrewshire in the nineteenth century, today the Midtown Draw Kiln, near the Skiff Woods above Howwood, is the only upstanding draw kiln in Renfrewshire.

The draw kiln was a more sophisticated type of kiln although the method of production was in not radically different. Alternate layers of coal and lime were burned on the top of the structure. The fire was kept burning continuously for a whole season. Because the fire was above ground level, the burnt lime dropped down into a draw hole where it could be collected with relative ease. The draw kiln had the advantage over the clamp kiln because batches of lime could be produced and collected for distribution every two days. 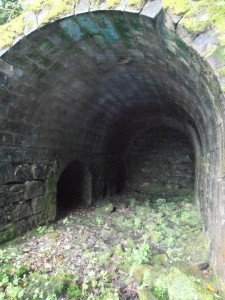 Midtown Limekiln was built into the edge of a large limestone quarry and mine, and has three draw holes enclosed within an arched chamber. The arched chamber was large enough to accommodate a horse and cart, allowing the lime worker shelter from the elements when drawing off the lime and when loading the lime on to carts for distribution.

The work force at Corseford’s clamp kilns worked out in the open in all weathers and the workers must often have been cold, wet and very filthy! It would seem preferable to have been a lime worker at the Midtown Draw Kiln with its more sophisticated method of production and its shelter for at least some of the working day.

Further information can be obtained in articles by Stuart Nisbet in Renfrewshire Local History Forum Journals, Vols. 9 and 10.