Older residents in Kilbarchan will remember with some nostalgia the Kilbarchan Co-operative Society. Its shops were the equivalent of a supermarket on the doorstep. Unlike modern supermarket stores, the various departments, all conveniently within walking distance, were situated throughout the village. The ‘High Co’ was in New Street, the ‘Low Co’ was in Low Barholm and the dairy, the butcher’s shop and the drapery were in High Barholm, where the present-day co-op convenience store is situated. The ‘Low Co’ and the ‘High Co’ stocked a wide range of groceries. While the customer waited, dried goods were carefully weighed and supplied in brown paper bags. Butter, taken from a wooden barrel, was carefully weighed and shaped with wooden butter pats into useable small blocks. The co-operative shops afforded a relaxed and sociable atmosphere where village customers and shopkeepers could pass the time of day and catch up with local affairs and gossip.

The co-operative movement began in Rochdale in 1844 when the Rochdale Society of Equitable Pioneers, with a membership of thirty tradesmen, including ten local weavers, set up a consumer co-operative grocery store where consumers were paid a patronage dividend. The movement rapidly spread. Ten years later there were almost one thousand co-operatives in Britain. But how did it begin in Kilbarchan?

An early non-dividend co-operative was run in Kilbarchan by village Chartists in the 1850s, but this was not run on Rochdale lines and was short-lived. In 1872 Kilbarchan Co-operative Society, run on the Rochdale principles, was started in a weaving shop in New Street. A few years later another co-operative was established at 36 High Barholm, but it soon got into financial difficulties and was taken over by the New Street co-operative in the 1880s. By 1899 the Kilbarchan Co-operative Society was thriving with two grocery shops in the village – a central store at No.4 New Street, run by Robert Hart and a branch at No.1 Low Barholm, run by John Miller.

In the nineteenth century the Co-operative was regarded not just as a retail outlet but, officially in Parliamentary Papers, also as a Friendly Society. As well as paying dividends, Kilbarchan Co-operative Society organised annual excursions for its members. In 1885 the excursion to Ardrossan was accompanied by Kilbarchan Instrumental Brass Band. Another excursion went to Rothesay. In 1886 Malcolm Neil, a prominent co-operator in Kilbarchan, was elected as a director of the Scottish Co-operative Wholesale Society. However, Malcolm Neil is better remembered as one of the joint pursuers in the famous Kilbarchan Right-of Way case. 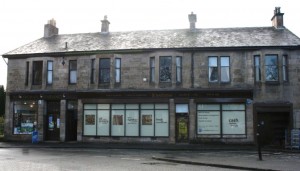 Kilbarchan Co-operative Society continued to prosper. In 1904, the society bought 1216 square yards of ground bounded by Well Strand from Richard Hunter of Glentyan Estate. A new two storey building was erected on the site in High Barholm. By 1910 this building, with four flats in the upper storey, housed the co-operative’s Fleshing Department run by David Murphy and its Drapery and Boot Department run by Christina Gibson. Also, a co-operative Coal Department, run by Colin Lind, had been established at Milliken Park Station. All this was in addition to the New Street and Low Barholm grocery stores. By 1912 further expansion added a dairy in the High Barholm building. The administration of the business was run by a committee of local men who acted as president, secretary and treasurer.

By 1975, more than a century after the founding of the Kilbarchan Co-operative Society, the shops in High Barholm and New Street, under the ownership of Paisley Co-operative Manufacturing Society, were still serving the village, but the ‘Low Co’ had closed.