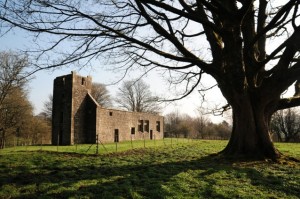 Thanks to the care of Historic Scotland, the Collegiate Church on the Castle Semple Estate is one of the few buildings in this area which dates back to the start of the sixteenth century. The Semple family was one of the old Scottish families rewarded for their support of the king at the battle of Bannockburn by the granting of lands in the Lothians and at Largs. Continued support of the monarch resulted in a knighthood being conferred on John Semple by King James I in 1430. Sir William Semple of Ellieston received the charter of the Baronies of Ellieston and Castletoun in 1474 and another John Semple became the first Lord Semple in 1488.

Lord Semple constructed a home at Castleton on the site of Castle Semple House and moved from the tower house at Ellieston in Howwood. In 1504, he founded the Collegiate Church alongside Castleton, “Built to the Glory of God and of the Blessed Virgin Mary, for the prosperity of his Sovereign Lord King James IV, and Queen Margaret, his Royal Consort” and the souls of his ancestors and descendants.

The following year King James IV visited Lord Semple but, sadly, only eight years later, both John and his King died at the Battle of Flodden. The finely carved tomb of Lord Semple and his first wife, Margaret Colvil, is set into the wall of the Collegiate Church. 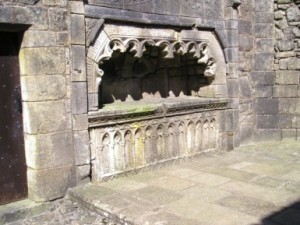 Another Semple gravestone propped upright inside the north wall of the ruined church is in memory of Gabriel Semple. The inscription reads ‘HEIR LYIS GABRIEL SEMPEL BROTHER TO CA ROBERT SEMPEL OF CRAIGBAIT QVHA DECEISIT YE 4 OF MAI AN 1587’. This Gabriel was the grandson of Gabriel Semple, a younger son of the 1st Lord Semple. It is said that other Semple burials lie in lead coffins under the floor of the church.
© 2011 Elizabeth West, Lochwinnoch Historical Society