The three oldest of Bridge of Weir’s mills were covered in the last issue of the Advertizer. These evolved into a variety of mills, which were the mainstay of the village. The mills were situated along a few hundred metres of riverbank, through the heart of the village. Other large cotton mills on the Gryfe were built on pre-existing mill sites, removing all trace of earlier mills in the process. However at Bridge of Weir the old and new mills survived side by side. This was due to clever water management of local man Peter Speirs.

From the late 1770s the big new story in Renfrewshire was of cotton mills. These were far beyond the scale of earlier mills, and much bigger than any buildings in the area. By the 1790s Renfrewshire had half the water powered mills in Scotland. Interest gradually moved to sites which were quite remote from the centres of Paisley and Glasgow. Peter Speirs of Bridge of Weir placed the following advert in the Glasgow press:

“Site for a cotton mill at Bridge of Weir, apply Peter Speir at the Mill of Gryfe. This mill can never be in back water.”

This advert effectively marked the founding of the village of Bridge of Weir. The highest cotton mill in the village was at Burngill. This was the second cotton mill to be built in the village, founded in 1792 by merchants Robertson and Aitken. By the 1840s it was 44 metres long and 4 storeys high. A water wheel four metres in diameter drove 6,240 spindles, employing 100 villagers.

The remains of Burngill’s dam can still be seen just upstream of the railway viaduct. The sluice gate lies on the south bank of the Gryfe, just under the viaduct arch. After powering Burngill’s mill wheel and supplying the old waulk mill (later Burngill tannery), the tailrace exited from a rock tunnel. This tunnel can still be seen down in the gorge on the upstream side of the modern bridge over the Gryfe. 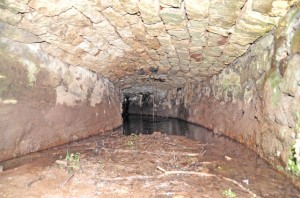 Below the old cotton mill was the main fall in the village, which had traditionally powered the Mill of Gryfe. In the 1790s this dam fed a higher and a lower lade. The high lade drove a group of mills. Apart from the original Mill of Gryfe, these included later cotton mills, Gryfe Grove cotton mill, Shanks cotton mill and a sawmill. The brick arched tailraces of some of these mills still survive.

After driving these mills, the water exited into the lower lade, where it was then used to power the Laigh Gryfe cotton mill. This was the third, lowest, and largest cotton mill in the village, built in 1794 by Black Hastie & Co. In 1806 the mill was sold to the Freeland brothers, who became benefactors in the village. By the 1840s Laigh Gryfe mill was more than 60 metres long, containing 18,000 spindles. It was driven by an iron water wheel, 6 metres in diameter, and employed 260 villagers.

Laigh Gryfe cotton mill was burnt down to its lower stories in 1898. It was sold to the owners of Burngill tannery, and another tannery rose from the cotton mill foundations. This became known as Clydesdale Works, which survived until demolition in 2005.