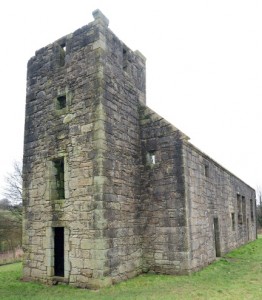 Within Castle Semple Collegiate Church near the entrance doorway (front right in the picture) are a collection of graves of the Harvey family who occupied Castle Semple in the nineteenth century. The Harveys were an Aberdeenshire family who, like the Macdowalls a century before, made their fortune in the West Indies. The Castle Semple Estate was bought from the McDowalls in 1815 by John Rae who inherited considerable wealth from the family of his mother, Elizabeth Harvey. On inheriting he took the name of Harvey. When he died in 1820, the estate passed to the family of his elder daughter, Margaret, wife of Major James Lee who came from a prominent Dublin family and had served with the Duke of Wellington. Again, on his wife’s inheritance, James Lee took the name of Harvey. James Lee Harvey’s sister, Anne Lee, lived with her brother’s family, reaching the grand old age of 99. She is buried in the Collegiate Church. 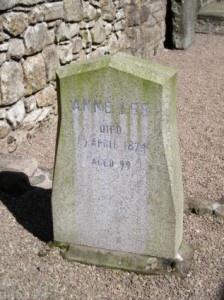 The two eldest sons of James Lee Harvey inherited in turn without providing an heir and the estate passed to their brother Henry Lee Harvey in 1883. Henry had married his cousin whose father was the 12th Earl of Buchan; they were a much loved family, remembered by memorial windows in Lochwinnoch Parish Church, Howwood Church and Holy Trinity Church in Paisley. Sadly, their only child, Alice, died aged nine and the graves of Henry, Elizabeth and Alice are side by side at the entrance to the Collegiate Church.

The estate again passed to a nephew, the son of Henry’s sister Margaret who had married her second cousin Charles Farquhar Shand. The Farquhars and the Shands were wealthy Aberdeenshire families who had interests in the West Indies and also in the sugar estates of Mauritius. Charles was appointed Chief Justice of Mauritius and was knighted in 1869. His son, taking the name of Harvey on inheriting the estate, was James Widdrington Shand Harvey and was to be the last laird. The last in this little group of graves is that of Sir Charles Farquhar Shand, his father, who died in 1889. 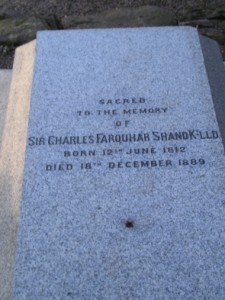