A walker or cyclist travelling on a winter’s day along the cycle track from Lochwinnoch to Kilbirnie may see on the left of the track (just after it passes Hole Farm, about 2km. from Lochwinnoch) a tall chimney, standing in isolation as if stranded among the encroaching trees near the edge of the loch. What was the building? What was it used for? 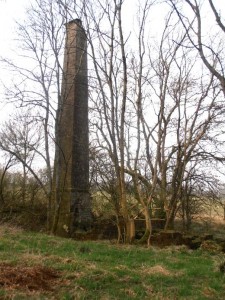 The first known building on the site appears on the 1857 Ordnance Survey map. The accompanying notes described it as a strong stone building supporting a large waterwheel which helped to pump water from the then-drained Barr Loch. It was built at the expense of Colonel McDowall, owner of the Castle Semple Estate from 1841, so it probably dated from the late 1840s.

When McDowall inherited the estate (which included Barr Loch), the loch was used as meadows for oats and hay. Successive owners of the estate from the 17th century had attempted to drain the loch, but with patchy and often short-lived success. The most elaborate scheme (and that inherited by McDowall) was carried out by James Adam between 1813 and 1815. The waterwheel and pump were McDowall’s attempt to make Adam’s system more effective.

By the time of the next Ordnance Survey map in 1897, the large waterwheel was taken down, probably because of problems with the water supply. It was replaced by a steam engine, and the present high chimney was built. The existing buildings were modified and extended to accommodate these changes. The purpose of the building was still the same – to help keep the loch drained – although the pumping mechanism was changed to a more efficient one.

The other change shown on the 1897 map was the addition of a completely new structure at the corner of the pumping-house. This was a sawmill, with its own source of power (a small, water-driven turbine). It can never have been more than a small estate sawmill, possibly supplying the furniture-manufacturing firms of Lochwinnoch.

The sawmill continued in use until after the Second World War, eventually closing in the late 1940s. The fate of the pumping engine is less certain: Barr Loch continued in its drained state until 1946 (albeit as rough grazing), but then flooded suddenly, to become a loch again. Did the pumping engine survive until 1946 or was it abandoned earlier?