The village of Kilmacolm is surrounded by farms with names which go back at least as far as the sixteenth century and possibly to early mediaeval times. High Mathernock, on the north side of the Gryfe Water, is one of those farms whose forgotten history involving milling as well as farming is gradually coming to light. 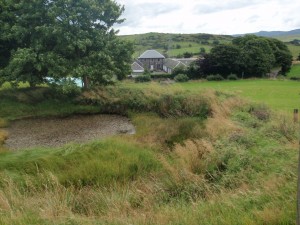 High Mathernock, seen here from its reservoir, replaced the earlier farm and settlement which were situated much closer to the Water of Gryfe

The modern farm at High Mathernock has stood in its present location since the 1830s and was built in stages by the Shaw Stewart family for the tenant John Lang. Earlier activity at Mathernock, however, took place closer to the Water of Gryfe.

When Timothy Pont surveyed Renfrewshire in the sixteenth century he considered Macharnoch, the waulkmill, and Macharnay (possibly an older name for the nineteenth century Low Mathernock) significant enough to be mapped. All that remains of Pont’s Macharnoch which probably lay just north of Mathernock Bridge is possibly the few courses of stone wall low down on the river bank where, according to folk memory, there was a corn mill. There are two records of a corn mill on the site, one in a record of the Scottish Parliament in 1670, the other in a book about Renfrewshire written in 1782 which states that formerly there was a corn mill there. Further downstream on the other side of Mathernock Bridge lie the probable remains of the waulkmill in the form of a dam to deflect the water course, a partly silted up lade and the remains of walls. The still thriving patch of very old sloe bushes could have used in the dyeing process.

Eighteenth century records show a thriving community at Mathernock involved in a wide variety of occupations. The earliest Kilmacolm Parish Records up to 1745 don’t give occupations. However, in the second half of the eighteenth century we know that people made their living in a wide variety of ways e.g. living and working in Mathernock were a maltman, a smith, millers, farmers, a workman, a weaver, a dyster, a herd, a mariner, a ‘musiciner’ and many others whose occupations were not noted when they married or died. By the nineteenth century, all traces of milling and weaving had disappeared and the people of Mathernock were making their living as farmers and labourers, the principal farmers being the Langs.

Although many field boundaries have been erased by modern farming methods, there remain those which surround an irregular narrow enclosure running down a south facing slope towards the river. The farm of Low Mathernock lay here and before that the fermtoun of Mathernock. The footings and platforms of several buildings can be made out as can the line of the road between Kilmacolm and Port Glasgow, which can be seen on maps from the end of the seventeenth and beginning of the eighteenth centuries.