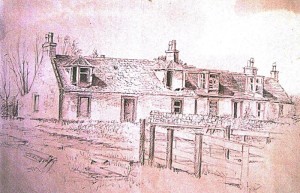 Pencil Sketch of Little Kaimhill Cottages before they were demolished

Kaimhill Cottages were built on the site of the former farm steading of West Kaimhill. Both cottages were built in a style common to the agricultural cottages in 19th century Scotland. They were situated in an acre of ground between Kaimhill and Coalbeg Farms to the north of the road from Locher Bridge to Crosslee. The main building consisted of two cottages abutting each other, with various additions built on at later dates.

The original occupant of the first cottage to be built was John Barr, late of the adjacent farm of Coalbog. Perhaps making a career change from farmer to builder, James Barr ‘seized’ (took possession of) in June, 1801, an acre of ground with the houses thereon being part of the lands of Kaimhill called Coalbog. These old farm buildings may have been deemed only suitable material for dismantling and for re-use in the construction of the improved steading buildings then being erected.

John Barr appears to have worked as a mason for some years and later became overseer at Craigends. He continued in the Cunninghames’ employ till March, 1827, when he retired to his cottage at Little Kaimhill. He died in the 1830s and was buried in Kilbarchan East Church graveyard. His wife, Mary, aged 75, still lived in the cottage in 1841.

The next occupants of the cottage in the first half of nineteenth century were coalminers. John Craig was probably employed in the coal pits being worked in conjunction with the nearby lime works by the side of the Gryffe. About 1845 John McGilchrist, a coal and lime master from Balgrogan, Campsie in Stirlingshire moved to Bridge of Weir and lived in the cottage with his wife and six children He became a local coalmaster, probably operating Kaimhill Coal and Limeworks from then until 1859, when it closed and he returned to Campsie.

The 1861 census for Kaimhill had the first notification of two cottages on the site. One cottage was of one room only and was occupied by James Livingston, a retired farmer aged 82, and his wife and son. The other cottage had two rooms and was occupied by William Woodrow, age 36, a grain miller from Kilbarchan, and his wife and family. Later James Stevenson, a carter from Kilbarchan, and his family occupied the larger cottage before moving to Barnbeth where the Stevensons of Barnbeth ran a potato merchants business from a yard in Church Street in Johnstone until 1881.

By 1881 both cottages had been extended. Hugh Wallace, a mason who had owned a building business in Hill Street, Kilmarnock in the 1860s, moved to Kaimhill in 1873. He is a likely candidate for the person who carried out at least some of the substantial changes to the cottages between 1871 and 1881. Sadly, he died in unfortunate circumstances in 1883. He was last seen in Bridge of Weir village on his way home and is supposed to have had a considerable amount of money in his possession. Some days later his body was found in the River Gryffe near a ford. As he was a prosperous man he is an unlikely candidate for suicide. Perhaps he was making his way home via the ford and lost his footing.

Later occupants of the cottage at the end of the century included George McKenzie, a painter and photographic artist, William Lee, a retired farmer, and Hugh Keith, a railway contractor, who died at Kaimhill in 1925. The cottages remained in the possession of the Keith family for another 50 odd years.
© 2012 Bill Speirs