Situated at the corner of Beith Road and the Linn Brae, almost unnoticed, there is a seated area known as Gordon Square. It is small for a square, much smaller than the well-known Houston and Ludovic Squares, and many people may not recognise it as being worth much attention. This little square is dedicated to the memory of General Gordon of Khartoum! If you visit the square you will see a memorial tablet on the gable end of the old building which once was Quarrelton School. 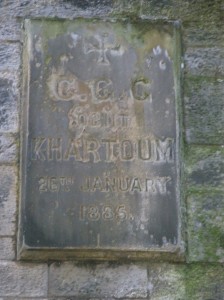 General Gordon was born on 28th January, 1833, in Woolwich, England. He was the son of a Royal Artillery officer, and followed his father into the military life and had a distinguished military career. In 1862 he was sent to protect the European trading station of Shenghai from the Taiping Rebellion. After defeating the Taiping Emperor, Huing Hsui, he brought to an end the civil war which had raged in China for years.

In recognition of his service, Governor Li Hung Chang presented him with the highest honour possible in the Chinese Empire, the Order of the Yellow Jacket. With this accolade he became, with fifty nine others in the empire, second in rank to the Emperor himself. It was after this that he became known as George ‘Chinese’ Gordon.

He returned to England and was stationed at Gravesend. During this time his father became very ill. His father’s illness affected him greatly and he entered a stage in his life where compassion and good works were a driving force. He personally nursed his father during the last days of his life. Later he did some teaching in the local Ragged School, he nursed, clothed and fed the sick and opened up army land for the poor to farm. He set up pensions for several elderly people and it is believed that he gave away ninety per cent of his army stipend. This he continued to do until his death at the Battle of Khartoum. Along with his entire garrison, he was killed on 26th January, 1885, two days before his fifty second birthday.

But what is the connection with Johnstone? The Laird of Johnstone, George Ludovic Houstoun, had met General Gordon and had corresponded with him during his many travels. Saddened by General Gordon’s death, the Laird had the square built in ‘a tranquil tree-canopied setting’ to the memory of his friend. 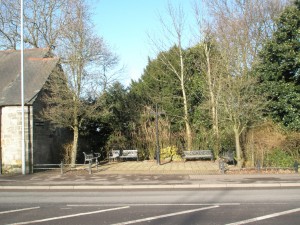