A little east of High Lawfield Farm on the road from Kilmacolm to Houston, an old track winds down from the road to the ruins of Laigh Lawfield Farm and continues as a marked pathway to Knapps. Information from old maps and parish records establishes early settlement and land use at Lawfield.

At Laigh Lawfield (see sketch below) the foundations of at least half a dozen stone structures stand to height of little more than half a metre with about twenty well-established sycamore trees growing out of the ruined walls. The raised round platform on the south-east of the site was a mill powered by horses and it is possible that the u-shaped arrangement of stones to the south may be the remains of a corn kiln. The farm was deserted by the 1890s when the OS map shows no fully roofed buildings on the site.

From the mid-eighteenth to mid-nineteenth century High Lawfield was farmed by a family named Laird. Gateside, the smallest of the three farms, no longer existed during this period.

Laigh Lawfield was occupied by Allan Speir in 1731. The Horse Tax Records document David Scott as the farmer at Laigh Lawfield in 1797. He owned two working horses and paid a tax of four shillings. In 1841 another D. Scott, aged 55, with two agricultural labourers and two female servants, farmed Laigh Lawfield. 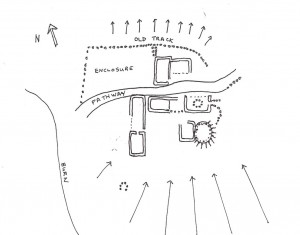