Near Knapps Loch, which lies just north of the road as you enter Kilmacolm from the Bridge of Weir, there is a round mound, marked ‘homestead’ on modern maps. It lies hidden behind a stone dyke at the top of a field on the north of the loch. It is easily spotted in winter and spring, but is more difficult to find in summer when it is covered in bracken. The late Frank Newall led an excavation at the site and his report (1965) gives information on people living on the mound in both pre-historic and medieval times. 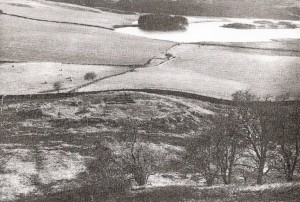 This photograph, taken from the edge of Kilmacolm Golf Course during the excavation, is reproduced with the kind permission of Mrs Catherine Newall. Today the site is encircled by a planting of fir trees.

The mound was first settled by Neolithic farmers. A large sub-rectangular building and three hut dwellings were built on top of the mound. The large building was supported by six major wooden posts. Its walls were made of brushwood and small branches and there were hearths inside the structure. The settlement was enclosed by a wooden fence or palisade. Two flint knives, triangular quartz blades, flint and quartz scrapers, fragments of pottery and saddle querns were found. The querns were used to grind grain

The mound was again settled in 14th or 15th century as a farm or homestead encircled by a stone wall. Inside the wall there was a stone-built farmhouse with a byre attached. The building had a cobbled floor and the back wall was part of the surrounding circular wall. There was also a granary, a store house and a barn inside the circular enclosure. Finds from the medieval period include glazed pottery sherds, and fragments of two shale bracelets.

Local tradition has it that stones from the medieval farm buildings and enclosing wall were used to rebuild, or extend, Killallan Manse in 1635. The plans in Frank Newall’s excavation report show foundations of a seventeenth century rectangular stone building and, during the excavation, a heavy iron mason’s chisel and a Charles I coin considered to be dated 1632-38 were found. The report considers the building to have been a shelter for workmen when the stones were being removed to Killallan Manse.

However, a later additional scenario is worthy of consideration. The site has been referred to locally as the ‘Auld Kirkstead’ and, on a recently discovered survey from the 1730s by John Watt, a building marked ‘Old Church’ is shown on the site. Strangely no evidence of grave stones or other artefacts indicating use as a place of worship were found during the excavation. This presents a bit of an enigma.

After the restoration of Charles II in 1660 when bishops were re-imposed on the Church of Scotland, many of the congregation in Kilmacolm Parish joined their minister, James Alexander, and became Covenanters. Conventicles were held by the Covenanters in the locality, near Ladymuir. Could another secret meeting place of the Covenanters have been the ‘Auld Kirkstead’ on the mound at Knapps?