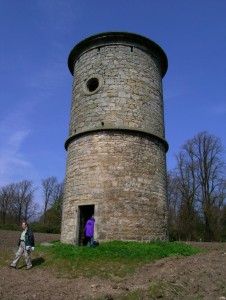 A mysterious old tower, reminiscent of Rapunzel’s tower in the fairy tale, stands on the old Milliken Estate. It can be seen in the distance on the right across the bypass when walking along the cycle track from Johnstone to Kilbarchan. But what is it? Why is it there? Who built it?

In the 1720s the land for Milliken Estate, including the old Castle of Johnstone, was purchased, on Milliken’s behalf, by his friend William McDowall of Castle Semple, another West Indian plantation owner. The land was farmland and lay open and unenclosed. In 1728 the surveyor John Watt, an uncle of James Watt the steam engine pioneer, was employed to lay out a planned estate at Milliken. At the heart of the new estate was a country villa, built in the Glasgow merchant style.

In the spring of 1729, Milliken returned to Scotland with his family, a very rich man after 30 years on the Leeward Islands of St Kitts and Nevis. He demolished the old Johnstone Castle near Brookfield, and moved into his new mansion, Milliken House. This mansion house was unfortunately destroyed by fire in 1801, and was replaced on a different site by a second Milliken House in 1836. This second Milliken House was demolished early in the twentieth century.

Milliken Estate survives mostly as farmland, and there is little left to remind us of the Millikens. One of the few original features from the eighteenth century planned estate is this mysterious circular tower. The tower was the Milliken Estate doocot. Inside the circular walls are a thousand stone nesting boxes for the birds. The doocot was built to keep pigeons destined for the Millikens’ winter larder.
© Stuart Nisbet 2010