Just as Paisley had Tannahill, Kilbarchan had its own weaver poet, Robert Allan. The son of a flax dresser, Robert Allan was born in Kilbarchan in 1774. For most of his life he lived and worked as a silk weaver in the old part of the village known as Tounfoot. In the eighteenth century Tounfoot was a thriving community occupied by weavers and other tradesmen. It had a female school, a poor house and a Baptist meeting house. Tounfoot was demolished in the late eighteenth century. The land at the bottom of what is now Church Street where Tounfoot stood became part of Glentyan Estate.

In his forties Robert Allan was an active Radical and played a significant part in political meetings and demonstrations. He presided over an important Radical meeting in the Relief Church and with other Kilbarchan weavers played a prominent part in the Radical demonstrations in Paisley in 1819 and 1820.

The two poets, Robert Tannahill and Robert Allan, were close friends and literary associates. Both were admirers of Robert Burns. Robert Allan was an active member in Kilbarchan Burns Anniversary Society, founded in 1806, and was much respected as a poet by the members of Paisley Burns Club who greatly admired his work. On 5th February, 1818, they elected him as an honorary member of Paisley Burns Club in appreciation of the quality of poems he had sent to them.

Although Robert Allan had been writing poems since the early eighteen hundreds, none of his poems had been published. In 1819, the year after he received his honorary membership of Paisley Burns Club, several of Robert Allan’s songs were published in the Harp of Renfrewshire and received special mention by the book’s editor, William Motherwell. In 1836 Robert published a book of his own poems entitled Evening Hours: Poems and Songs. As was common at the time, the book was published by subscription. Despite his previous acclaim as a poet and the support of the subscribers, the book was not so well received as he had hoped and was not a financial success. He was disappointed and felt his merit as a poet had not been recognised. He is said to have become ‘irritable in his temper and gloomy in appearance’. According to David Semple (1874) his disappointment influenced his later decision to leave Scotland and emigrate to America.

In the past, some of Robert Allan’s friends had emigrated to America where they prospered. It is likely that James Scouler was one of these old friends. James Scouler, a calico printer at Locher, had fled to America after involvement in a secret Radical meeting which he attended in Kilbarchan in 1816. He subsequently established a large, successful printworks at Arlington in West Cambridge, Massechusetts, and was a wealthy man. In 1838 he left his business in the capable hands of his sons and made a return visit to Scotland where Robert Allan may well have met him in Kilbarchan.

Whatever the reason for his decision, Robert Allan, then in his mid-sixties, emigrated to America with his son Robert in 1841, but six days after his arrival in America he unfortunately died of a chill caught at sea. At the bottom of Church Street near the spot where his house once stood, a commemorative well was erected to his memory by Kilbarchan General Society in 1935. He is the only Kilbarchan weaver to have a commemorative monument in the village. 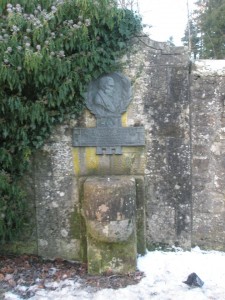