The rural banks of the Gryfe between Bridge of Weir and Crosslee may seem unlikely locations for mine workings but, for at least 200 years, they were the location of an intensive quarrying and mining industry. Local coal was mined for use in the process of turning locally quarried limestone into lime. Today there is little to remind us of the coal mining industry, apart from hints contained in place names such as ‘Coalbog’ but there are plenty of reminders of the lime producing industry.

Quarries were opened to provide lime for mortar for the building of the six-storey Crosslee Cotton mill in the 1790s but the main use of lime from the mid eighteenth century was as an agricultural fertiliser. Old lime workings in the Gryfe and Locher area dating from the late 1600s had their heyday during this later period, when farming improvements were being introduced across the country. Adding lime to the local clay soil could multiply crop yield several times over.

Lime was therefore a very valuable asset to any estate owners who were lucky enough to have it under their lands. It was used as currency, and to pay rents, often resulting in legal disputes. In 1760, Houstoun of Johnstone took one of his tenants to court to recover debts for lime given to fertilise one of this tenant’s fields. In 1808 another local landowner, Cunningham of Craigends, stipulated that half of his coal was to be used for lime burning, and half sold to households. His then neighbour, Houston of Johnstone, declared that “none of my coal shall be sold, but used utterly for burning the limestone”. Limestone was more valuable locally than the coal. (Is this the same H of Jo mentioned in 1760?)

When you walk down the Crosslee Mill lade path from Bridge of Weir to Crosslee, the old lime quarries and clamp kilns can be seen at Goldenlee, and also further down towards Crosslee. Clamp kilns were a crude type of kiln – a hollow dug into a slope, and shaped like a horseshoe. The limestone and coal were laid in alternate layers and the kiln was lit and left to burn for several days. When it was ready, local farmers queued to shovel the burnt lime onto carts, to fertilise their fields. 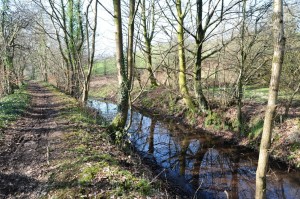 A better known type of lime kiln was the draw kiln. Draw kilns were substantial standing structures. The only remaining upstanding draw kiln in west Renfrewshire is located in the Skiff Woods at Howwood.

On the south side of the Gryfe, lime workings were more intensive. At Kaimhill, a large buttressed draw kiln was used to burn the lime. All that remains of this kiln today is a scatter of bricks and limestone in a field. The old entries to the limestone mines can still be seen nearby, in a rock outcrop facing the Gryfe.

Further lime working occurred along the Locher Water. There was a “great” limestone work near where the Locher meets the Gryfe. A 1720 map shows a waterwheel, supplied by a lade from the Locher, which turned an engine to pump the adjacent coal pit dry. A kiln and coal pit can still be seen nearby.

Further up the Locher Water, lime was worked around Lochermill and further east at Tweeniehills and Merchiston. At the aptly named Windyhill, the lime quarries were drained by a pump driven by a windmill. All that remains today are hollows in the fields, marking the abandoned quarries.

The old lime quarry on the cycle route behind Merchiston hospital at Brookfield is a typical example. The lime was gradually worked across the field. In winter the workers “tirred” the quarry, to remove the soil and expose the lime. In the summer the limestone was quarried and burnt a in a large draw kiln, now demolished. Today, all that remains of the quarry is a wasteland of flooded woodland, full of piles of quarry waste.

By the Victorian period, the shallow lime had all been worked out. Much deeper lime was then mined, along with coal, from shafts at Fulton and Darluth.