Natives of Kilbarchan village are known as ‘Habbies’ in memory of the Kilbarchan piper, Habbie Simson, whose statue stands in a niche on the Steeple. 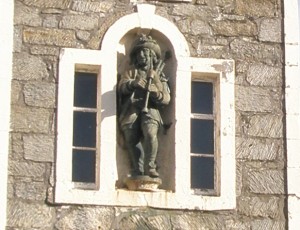 But who was Habbie Simson? What do we know of his life? A contemporaneous poem entitled The Life and Death of the Piper of Kilbarchan, written by Robert Sempill of Belltrees (c1599-1661) laments his death and gives some insight into his life. The earliest extant copy of this poem was published in a broadsheet before 1700.

Robert Simson, known as Habbie, was born in the latter part of the sixteenth century. He was a colourful character who wore feathers on his hat. Tradition has it that he was a flesher (butcher) as well as a piper.  The Life and Death of the Kilbarchan Piper tells of occasions and events where Habbie played his pipes, – the kirkyard on Sundays, weddings, Kilkbarchan Horse Races, St Barchan’s Day Feast, and the gatherings of Spearmen.  These gatherings, known as wappinschaws, were military musters or training exercises held twice a year in Kilbarchan.

Habbie was also known further afield when he played his pipes at Clark plays. These were stage plays performed on platforms in the open air. Habbie is said to have played at Clark plays in Edinburgh when the author of the poem, Robert Semple of Beltrees, attended court. Habbie was certainly a well-renowned as a piper, a celebrity in his day. His skill was acclaimed in the song Maggie Lauder written by Robert Sempill’s son Francis.

Further information on Habbie’s life is recorded in ‘The Poems of the Sempills of Beltrees’ published in 1849 with edited with notes by T. G. Stevenson. The notes include a brief account of Habbie’s life drawn up by Francis Sempill’s son, Robert. This account gives some details of Habbie’s boyhood. With other village boys he worked as a herd at Barrhill where according to Sempill there was a coalpit. He saved the money he earned as a herd and bought his first pipes from the village bagpipe maker for four pounds Scots. He married, probably Kathrein Pollik, and had at least one son whom he taught to play the pipes.

Robert Semple recounts a famous incident after a wedding in the village where Habbie provided the music. The wedding party retired to a little green at Pennel (Penwold on the road to Bridge of Weir) where Habbie continued to play for the dancing. The music included an exciting new tune, whip-meg-morum. During the revelry a young drunken fellow stabbed the bag for Habbie’s pipes with a knife. Habbie drew his kittoch (dirk) in retaliation and pushed the youth down. He thought that he had killed the man and went into hiding on Craigends Moss.

“But yet the man was hame before him, And was not deid !”

Habbie went home next day to be told by his wife that the man was live and well. However, Robert Simson (Habbie) did get into trouble with the law on other occasions.  He is documented in official court records in 1603 when he was banished from the Burgh of Paisley for ‘misbehaviour and certane offences, injuries and wrongs’

After an eventful life, Habbie lived to a ripe old age.

He is buried in Kilbarchan churchyard. His small flat grave stone lies next to the Auchinames enclosure and bears the initials H and S. What appears to be a butcher’s cleaver is inscribed on the stone.