The village of Bridge of Weir lies at the junction of three old parishes. The main part of the village, on the south side of the Gryfe, lies in Kilbarchan parish. To the north of the Gryfe are Houston and Kilallan parishes, which were united into the single Houston parish in 1760.

Water mills on the River Gryfe, upstream of Bridge of Weir, appeared in a previous issue of the Advertizer. This article looks at the early mills in the village. Once the Gryfe actually reaches Bridge of Weir, it powered another dozen mills, through what became the village. These mills originated from three early mills, a waulk mill, a lint mill and a grain mill, which were powered by three waterfalls on the Gryfe.

Above and below the ‘bridge’ of weir, the Gryfe falls steeply through a succession of rapids. The highest mill in the village was Burngill waulk mill, on the Houston side of the Gryfe. This mill was powered by a dam located just upstream of what is now the railway viaduct. Burngill waulk mill was operating by 1770, run by the enterprising Speirs family.

In most of Scotland, waulk mills were used for softening or ‘fulling’ cloth. Here the waulk mill was used for washing and dressing leather. Burngill waulk mill started the Bridge of Weir leather trade. Although Bridge of Weir became widely known as a cotton spinning village, the leather trade lasted longer, both predating and outlasting the cotton industry. Burngill waulk mill grew into a large leather works. It continued in the Speirs family until 1869, when it was sold to the Muirheads of Glasgow.

A second dam in the village was the ‘Red Dam’, a short distance downstream of the ‘bridge’ of weir. The Red Dam powered a lint mill on the Ranfurly side of the Gryfe, at Rowntrees. Lint mills were much smaller and simpler concerns than Bridge of Weir’s later cotton mills. Rather than spinning yarn, lint mills simply broke and softened raw flax, to prepare it for the hand spinning process.

Rowntrees lint mill has been the most elusive mill in the village, and its history has only recently been rediscovered. The mill was operated from the 1760s, by flax dressers John and William Lang. In 1792 it was described as ‘being of excellent construction, and the best frequented of any in the West of Scotland’.

A third dam, at the main fall in the village, was just below the Red Dam. This dam powered a grain mill, known as the Mill of Gryfe. This mill was by far the oldest mill in the village, probably dating from medieval times. It was located on the Houston side of the Gryfe. By 1727 Patrick Barr was the owner and in 1754 his daughter Elizabeth married into the Speirs family, who were later responsible for starting most of the cotton mills in the village.

The mill of Gryfe was used as a grain mill well into the nineteenth century. Apart from its dwelling house, the buildings were mostly demolished in the 1920s, as part of the later tannery expansion. 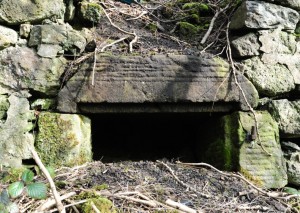 The article  ‘Bridge of Weir Mills 2’ will show how from the 1780s, these three old Bridge of Weir mills evolved into much bigger cotton mills, and became the main employers in the village.

This article is based on a longer article in the Renfrewshire Local History Forum Journal. Copies can be obtained by joining the Forum.