The old Parish Church in Kilbarchan, now used as the West/Parish Church Hall, was rebuilt in 1724 on the site of the former parish church. Two aisles, with burial mausoleums beneath and galleries above, were incorporated in the building. These aisles were owned by the most important landowners in the parish, the Houstons of the old JohnstoneCastle and the Cunninghames of Craigends. 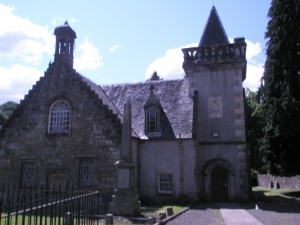 In 1733 James Milliken, a plantation owner who had acquired immense wealth in the Caribbean, bought the old Johnstone Castle and its lands from the Houstons. The Milliken family transformed the lands, now known as Milliken Estate, and were soon to become feu superiors of most of Kilbarchan village and patrons of KilbarchanParishChurch. They also took over the Johnstone aisle, which became known as the Milliken aisle. After three generations the male line of Millikens died out and the Napier family took over through marriage to one of the Milliken daughters.

When the present KilbarchanParishChurch was built in 1901, the old church was converted into the church hall. The renovation work necessitated the removal of the Milliken mausoleum. This mausoleum, beneath the enclosed gallery above, contained ten coffins of the Milliken family and their Napier heirs and descendants. This presented a dilemma! What was to be done with the coffins?

Perhaps fortuitously, Mary Milliken Speirs, a direct descendant of the Millikens, died in 1902. When she was buried in the new KilbarchanCemetery, these old coffins were removed from the old church building and interred with her remains. The names of those interred with her are listed on the reverse of her gravestone. These must be among the oldest interred remains in a modern cemetery.

However, the inscription contains a mystery. Listed above the first Milliken heir, Major James Milliken, is a ‘Sir’ James Milliken who died in the same year as the Major. Strangely, no other record can be found for Sir James. Did he really exist, or was he added to give a pedigree to the Milliken family, who otherwise originated as ordinary seafarers from Irvine? 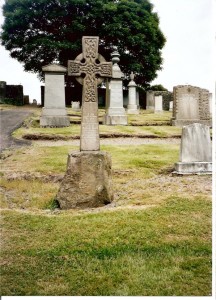 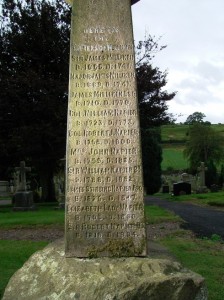 Reverse side of gravestone 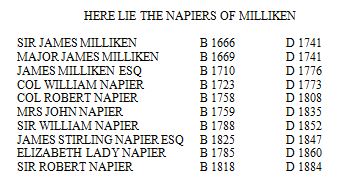