The River Gryfe rises on the slopes of Creuch Hill, on the boundary between Greenock and Inverkip parishes, almost into Ayrshire. The river falls quite steeply north for two miles, before it becomes dominated by two dams, completed in 1872. These have the imaginative names of ‘Gryfe No.1’ and ‘Gryfe No.2’ reservoirs. The reservoirs lie directly east of Loch Thom, but instead of following Loch Thom’s circuitous Greenock cut, the water from the Gryfe reservoirs flows down a deep tunnel to supply Greenock with drinking water. In the Victorian period this scheme was a great source of concern for Bridge of Weir residents, as it siphoned off much of the Gryfe’s flow.

Before the Gryfe reaches Bridge of Weir, it is joined by several lesser burns. The largest is the Green Water, which runs parallel to the Gryfe for many miles, before merging at Duchal. Before reaching Bridge of Weir, the Gryfe catchment supplied at least nine mill sites, including grain, waulk and lint mills. Several of the grain mills are ancient. Although often referred to as corn mills, in this area they invariably ground oatmeal.
Bridge of Weir is best known for cotton mills, but they were preceded by a much smaller type of textile mill, the lint mill. In the traditional linen industry, the preparation or dressing of raw flax was very labour intensive. In the 1790s the Old Statistical account noted that although “there are great quantities of lint raised in the Shire of Renfrew, the great expense of dressing it is a discouragement”. From the 1730s a government body, the Board of Trustees, encouraged and funded new lint mills. The lint mills mechanised the ‘breaking’ and ‘scutching’ of the raw flax, to remove the fibre from the stems.

One of the earliest lint mills in Scotland was on the Green Water at Duchal Steps. In 1733 John Wilson in Duchal Steps was granted the cost of building the lint mill there. There was a great deal of sharing of expertise and John Honeyman was brought to Duchal from Clayslaps lint mill on the Kelvin (below the modern Kelvingrove Museum). His brother Thomas Honeyman was working at Barochan Lint Mill in Renfrewshire. In 1730 there was another very early lint mill on the Gaton Burn at Nittonshiel. This was located in the centre of what later became Quarriers village.
Another early type of textile mill was the waulk mill. In waulk mills, cloth or leather was soaked in vats, mixed with soap and other chemicals. The wet fabric was then pounded with water-powered hammers to clean and soften it. Some sites had two or more mills. Recent work by locals has shown that Mathernock had waulk and grain mills as early as the 1580s. By the 1780s, Semple’s History of Renfrewshire, describes a waulk mill and an ‘ancient’ corn mill there. Waulk mills were connected with the tanning and dying trades and a dyster was living at Mathernock waulk mill in the eighteenth century. 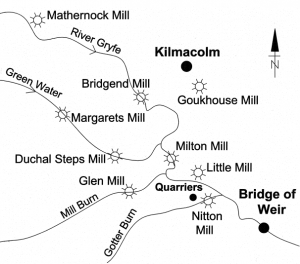