Robert, 3rd Lord Semple, (c. 1505-1573) was known as The Great Lord Semple. He lived in unsettled, violent times and was involved in on-going local feuds, battles between Scotland and England and religious conflict within Scotland engendered by the reformation. As a young man, Robert fought in numerous skirmishes with local families. These often entailed criminal offences such as reiving, spoliation and even murder, but perpetrators as influential and powerful as the Semples were seldom called to account.

After the death of King James V in 1542, Mary, his six day old daughter, became Queen and Scotland was ruled for some years by regents. Robert Semple was a staunch supporter of the House of Stuart and frequently attended court. A Catholic by faith, he seems at times to have found it politically expedient to give some tacit support to Protestant views. In 1544 Robert had a violent skirmish with two monks in the Paisley Abbey because he wanted ‘adequate cautioners’ (verification of authenticity) for the relics and ornaments held in the St Mirin Aisle. However, this action was not regarded as untoward, apparently, for in April of the following year he was granted by charter the Bailliary of Regality of Paisley for defending the monks of Paisley Abbey from heretics and tyrants.

Another more serious incident occurred in 1550, when in a heated argument at a gathering of nobles in the house of the Regent in Edinburgh, Robert Semple, who was said to have been supporting the new religion, became so incensed that he drew his dagger and stabbed William, 3rd Lord Crichton of Sanquhar, through the heart. With help of influential friends his death sentence for this murderous offence was reduced to a contract to pay compensation to Lord Crichton’s family.

On the international scene, conflict between England and France led Henry VIII to declare war on the Scots to force a marriage between his son Edward and the infant Mary Queen of Scots. The ensuing war was known as The Rough Wooing (1543-1550). In 1547 Robert fought at the Battle of Pinkie and, despite a rescue attempt by his friends, was taken prisoner by the English.

In the 1550s Robert, now 3rd Lord Semple and a staunch supporter of Mary of Guise, decided to build a fortified tower where his family and retainers could find refuge from the threat of marauding local or government attackers. This defensive structure, known as the Peel Tower, was built on a small rocky island on Castle Semple Loch. In October, 1560, the 2nd Earl of Arran, besieged the Semple castle. Held up for a week by violent storms, the Earl eventually set up his artillery and attacked the castle. The next day, the gatehouse tower fell and the castle was surrendered on the following day. Semple’s son was taken prisoner and the Semple Castle and Peel Tower were occupied by Arran’s forces. 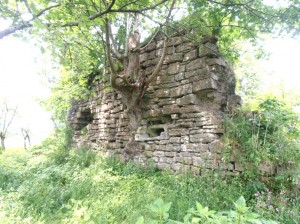 Remains of the south wall of the Peel Tower today

However, in 1567 after the murder of Darnley, Queen Mary’s husband, Lord Semple changed sides. He fought against the Queen’s forces at the Battle of Carberry Hill in that year and at the Battle of Langside in 1568, when Mary was defeated and subsequently fled to England. He was appointed Commendator (the secular equivalent of Abbot) of Paisley Abbey and was a member of Regent Moray’s secret council. However, after Moray was murdered in 1570, Semple was captured by the Hamiltons and imprisoned in Argyll for a year in the custody of Lord Boyd. 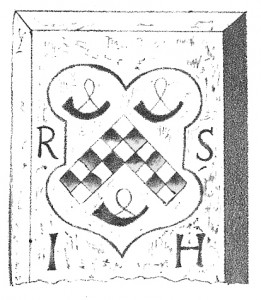 Robert, the Great Lord Semple, died around 1573, most probably at Castle Semple in Lochwinnoch. Although no evidence of his burial stone exists today, a drawing of part of a complete stone (c.5 x 2 feet) which lay in Lochwinnoch Churchyard in the late 19th century shows the Semple Arms and the initials of Robert, 3rd Lord Semple and his first wife Isabel Hamilton. No date or other inscription appeared on the stone. The Great Lord Semple certainly was strong, influential and powerful and could endure hardship – but was he really ‘Great’?