‘Not many estates of like size can boast such varied beauty as Glentyan.
To the painter, or landscape photographer, it is good hunting ground at all seasons of the year’.
James Wright 1929

James Wright’s statement is still true today. The beauty of Glentyan Estate is undiminished  –  lawns and woodland paths, redwoods and a magnificent ancient beech tree, said to be 400 years old, the lake with nesting swans, the occasional roe deer leaping through the woods and Kilbarchan Burn cascading through the woodlands from the lake.

Glentyan Estate lies to the west of Kilbarchan, with its entrance drive at the bottom of Church Street. Evidence of its history is no less fascinating than its beauty  –  the Georgian mansion house, the ruins of an old mill, the mill dam, the remains of old lades, old bridges over the burn,  and an ice-house possibly dating from the late 1700s. 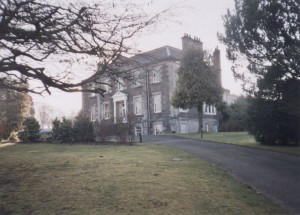 Glentyan House was built in the late eighteenth century by Alexander Speirs, a second generation linen merchant. In 1818 the estate was sold to Captain James Stirling who lived in Glentyan House for over fifty years. He was a popular local laird and a generous benefactor to the poor in times of need. After Captain Stirling’s death, the estate was sold to Thomas Mann. Unfortunately, Mr Mann was not so popular and numerous disputes arose with the villagers. The most notable was the famous right-of–way case in the early 1880s when the villagers took Mann to court over their right to use an old track through the estate. Mann eventually won the case in the House of Lords and the right-of-way was closed. It was replaced with a new right-of-way. This new right-of–way, the Dampton Pad, is still a pleasant country walk today.

In 1898 the estate was bought by Richard Hunter. Like Captain Stirling before him, he became involved in the affairs of the village. Richard Hunter is probably best remembered for the Glentyan Fete held on the Estate in 1929. The success of the fete led to the revival of Lilias Day in the 1930s. From the mid-twentieth century the owners of Glentyan Estate were in turn Duncan Leggat and then the Stakis family. The present proprietor is Andros Stakis.

Renfrewshire Local History Forum’s publication, ‘Glentyan Estate and its significance on the History of Kilbarchan’ is the third book in our Kilbarchan Toun Series. The book gives a history of the Glentyan Estate and its owners and their impact on the life of the village. It is well-researched and includes a number of photographs, drawings and maps. The final chapter deals with archaeological remains on the estate.