‘Near the house of Barochan, and within the Barony, was born the learned Mr William Jamieson. preacher of the gospel and professor of history in the university of Glasgow; a miracle for learning considering he is deprived of the sense of seeing (being born blind) yet his learned works give sufficient proof of his being a very able scholar.’[i]                                               George Crawfurd, 1710

William Jamieson was born in the Barony of Barochan in Killallan Parish in Renfrewshire in the mid-seventeenth century. As a parishioner, he would have attended Killallan Kirk. He is most likely to have been a relative of the Jamiesons recorded in the Killallan Poll Tax Records of 1695. Two farmers, both named John Jamieson, were tenant farmers in the Barony of Barochan, one in Corsliehill and the other nearby in Goslet. The rental value of each farm was 20lib. per year. Neither family had either farm or house servants and probably lived little above subsistence level.

William Jamieson became a preacher who was well respected in academic circles. What was even more remarkable, he was blind from birth! His genius appears to have been acknowledged early in his life when he was given financial support by William Cunninghame of Craigends, a local laird, in the neighbouring Parish of Kilbarchan. In his diary and expenditure book (1673-80) William Cunninghame records at least three transactions ‘to a blind scholar in Barochan’s land called William Jamieson, in charity’ –  one of six shillings in August, 1675, and two others in April 1674 and October 1676 of the considerable sum of thirteen shillings and fourpence.[ii] It is likely that the main laird in Killallan Parish, Fleming of Barorchan, also supported William Jamieson. However, no documentary records exist to substantiate this supposition. Fleming of Barorchan was a friend and probable drinking companion of William Cunninghame. An entry in Cunninghame’s diary records ten shillings ‘spent at Kilbarchan with Barochan’ [iii].

Although he was not from a wealthy family William Jamieson received his education at the University of Glasgow, perhaps funded by the local lairds. As a young man, he was well versed in Latin.

His friend and contemporary, Robert Woodrow (1679-1734), the Scottish church historian and minister of Eastwood Parish, records the circumstances of the death and execution of Archibald Campbell (c.1629 -1685), the 9th Earl of Argyle, who was captured at Inchinnan after his involvement Monmouth Rebellion. (The rebellion was an attempt to depose the Catholic King James II.) The day before the Earl, an assertive Protestant and regarded by some as a Christian martyr, was executed for treason in Edinburgh in 1685 he wrote his own epitaph in verse and William Jamieson turned the speech into ‘Latin elegiacs’. The full texts of both the Earl’s epitaph and Jamieson’s Latin version were recorded by Woodrow[iv]. The Argyle Stone in the grounds of the Normandy Hotel in Renfrew marks the site where the Earl rested after his capture. 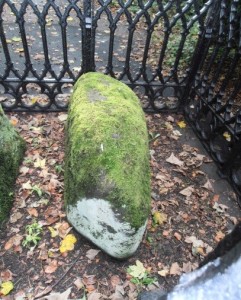 By the 1690s Jamieson had become renowned as a lecturer of history at the University of Glasgow. In May 1692 the Senate awarded him 200 merks Scots per annum for the next two years because he had ‘no estate to subsist by’.  In December of the same year he was appointed to give a public lecture on civil history at three o’clock each Thursday in the Common Hall. These lectures were delivered in Latin![v] .

He had at some time previously received funding also from the bishopric of Glasgow. Further funding was sought in the next decade. Letters, dated 1706 and 1709, from Mr John Stirling, Principal of the College of Glasgow, to the Earl of Mar, seeking a funding allowance for ‘Mr William Jamieson, a blind man and wonderful scholar’… ‘in our college’ are held in the National Archives of Scotland.[vi]

As well as lecturing at the university, William Jamieson wrote several books, some on the Episcopal controversy, the most noted being The Defence of the Church of Scotland written in 1713[vii]. When we take into account his blindness and lack of financial resources, he must have had an incredible intellect and prodigious memory to achieve his academic success and acclaim. Blind William Jamieson, a native of Killallan Parish, must surely be one of the most remarkable scholars of all time! Regarded as a ‘miracle of learning’ within his lifetime, he certainly must be Killallan’s most illustrious son.

[ii] Dodds, James The Diary and General Expenditure Book of William Cunningham of Craigends (Kept chiefly from 1673 to 1680), Edinburgh Printed at the University Press for T. and A. Constable for the Scottish History Society, 1887  pp34,57 and 82

[iv] Burns, Robert ed.  The history of the sufferings of the Church of Scotland from the Restoration to the Revolution by Robert Wodrow , Blackie, Glasgow, 1832, vol. 4,  p307