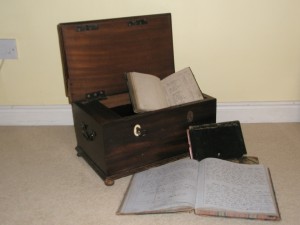 The Front Committee, listed as the ‘Committee of Town Management’ in the local Trades Directories, was established in Kilbarchan in 1822 to look after and maintain the public wells, the steeple clock and the village fire engine. Each feuar (property owner) in the village paid an annual levy, known as ‘front money’, to cover the expense incurred. The levy was set at one halfpenny per foot of the frontage of each property in the village. This rate set in 1822 was never increased. Front Committee officers were responsible for collecting the ‘front money’.

The Front Committee’s records are now in the keeping of Kilbarchan General Society and I was extremely fortunate some years ago to have access to the mahogany box containing the Front Committee’s records from 1822 until it ceased to function in 1899. The minute books give details of repairs to wells, the fires attended by the horse- drawn fire engine and costly repairs to the steeple buildings and steeple clock.

Each street in the village had its own pump or public well. Most villagers used the public wells where they collected water for domestic use. The Front Committee appointed contractors to carry out repairs such as the deepening of wells, the repair of steps and wooden housing, cleaning and puddling (making watertight using clay), and the installation of pipes and pumps. Immediate action was taken when repairs were needed.

A Front Committee officer attended to the winding up of the steeple clock, ensuring it kept good time and was in good repair. Over the years, the Front Committee’s responsibility gradually extended to include organising the finances for the maintenance of the whole of the Steeple Buildings. Repairs were often expensive and on occasion the cost had to be augmented by public subscription.

The Front Committee also took over the responsibility of the maintenance of the village fire engine and its attendance at fires. The horse-drawn fire engine had been brought to Kilbarchan from London in 1765 and was in use from then until the end of the nineteenth century. It has been on show in the Lilias Day Parades in Kilbarchan for a number of years now.

Many of the Front Committee’s officers were weavers. The first officers in 1822 were William Stewart, a shawl manufacturer in the village, Robert Climie a weaving agent, and Henry Manson and John Lang who were both weavers. Matthew Houston, who started his working life as a silk weaver and was later appointed Poor Inspector, served as the Font Committee’s treasurer for over twenty years from 1836 to 1858. The men who ran the Front Committee, although now long-forgotten in the village, were a well-intentioned, conscientious group of men who served their village well for over seventy years and deserve an important place in the history of Kilbarchan.