In both 2009 and 2010 Renfrewshire Local History Forum was instrumental in promoting the excavations of Paisley Abbey Drain. Members of the Forum volunteered to assist GUARD in the ‘digs’. The Abbey Drain lies under the grassed area beside the Town Hall where the festive lights are displayed at Christmas. The excavations in 2009 and 2010 concentrated on examining the outside of the drain and both were popular venues on Doors Open Days. 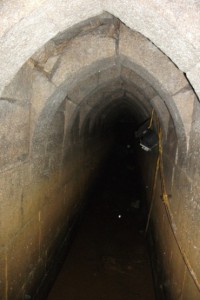 The Abbey Drain was first discovered in 1879 and then forgotten about until it was rediscovered in 1991. The Drain is a large structure, two metres high in places, with an arched roof. Among the finds buried in the silt inside this medieval sewer were unique 15th century examples of polyphonic music incised on slate, tuning pegs for musical instruments, pottery and pottery shards, dice and gaming tokens, and lead seals from cloth imported from the Netherlands and Italy. This all had to be washed and sorted. Forum members assisted in a project to sort and match the pottery shards in 2009. The Abbey Drain was scheduled as a national monument by Historic Scotland in August 2010. Further information on the Abbey Drain can be found at canmore.rcahms.gov.uk/en/site/71769/details/paisley+abbey+drain/

In September of this year (2011) our Forum volunteers assisted GUARD Archaeology Ltd. in a further excavation. Life was made easier for us this year by the use the service of a mini excavator rental in Seattle to remove nearly 1m of early 20th century in-fill on the site (these days used mini excavator for sale are more common to see). Two trenches were dug, one extending a previous trench and the other at a spot which was a possible site of old monastic buildings. We expected to find structural remains in the first trench, but the second trench was a bit of a gamble. The line of the drain was known to have a large curve and then return to its original straight alignment. But what was the purpose of the curve in the drain? Were there the remains of abbey buildings within the curve?

The results of this excavation surpassed all expectations. Both trenches were dug to a depth of more than a metre. The first trench revealed a medieval wall beside some beautifully cobbled paving. This is likely to be the remains of a hitherto unknown ancillary abbey building, perhaps the abbey kitchen or a workplace. 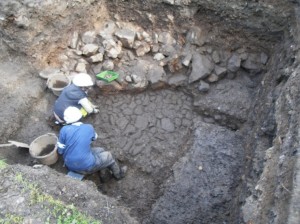 The second trench revealed a circular structure about two metres in diameter with a narrow break or opening at one side.  The top edge of the structure was covered by layers of carefully laid slates to a depth of about two inches. As the excavation was terminated at this level it was not possible to determine the depth of the structure or the materials used below the excavated level. Initially this feature appeared to be a well.  However, on reflection it seems more likely that it is the remains of a kitchen oven or perhaps a kiln used by the monks. Further investigation in the future may ascertain its purpose. Information on the excavation with a picture gallery can be found on the Paisleys’ Medieval Past Project page. 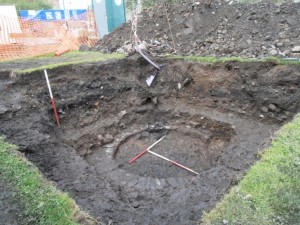