Formakin House, known locally as the Monkey House, was built in the early twentieth century by John Augustus Holms. His father Archibald Campbell Holms, the son of a Kilbarchan weaver, set up business in Paisley as a textile manufacturer. Business prospered and he was able to retire at the early age of forty and purchase Sandyford House in Paisley. At the age of 55 he married a young wife and proceeded to have twelve children.

John Augustus Holms, Archibald’s third son, became a stockbroker. Like his father, he too was very successful in business and became extremely wealthy. He was a collector of art and antiquities, with a collection said to have rivalled the Burrell collection. He also had a keen interest in horticulture with a special interest in rhododendrons. 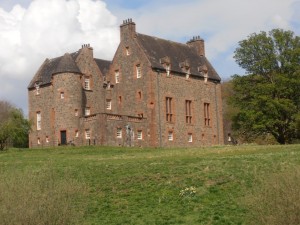 In 1902 John Augustus Holms bought land near Bishopton and appointed his friend the famous architect Robert Lorimer to build a prestigious mansion house, convert the old Formakin Mill and rebuild other old farm buildings on the site. The big idea was to create a 17th century Scottish tower house with formal gardens set in a landscaped estate with its mill, millhouse and ancillary farm buildings. The mansion house was intended to house his art treasures, probably in the baronial hall. Holms must have had a wicked sense of humour as stone monkeys sit on the rooftops of the Lodge Houses and one building has a lintel stone with the inscription DL 1694 ( DL standing for ‘damned lies’). 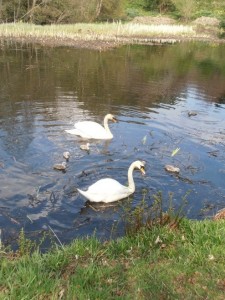 Robert Lorimer took advice on the planting and landscaping of the estate from Gertrude Jekyll, a leading horticulturist and garden designer of the day. Today part of the original landscaped estate is designated as an area of special scientific interest. Lorimer’s formal garden, with its stone summer house, its fountain guarded by four lions, and its orchard are part of the mansion house grounds. A small beautiful lake, now with nesting swans, is still a feature of the estate. The remains of the old mill lade, predating Lorimer‘s transformation of the estate, and what appears to be the rusting remains of the machinery for a gin mill can still be seen beside the old Formakin Mill.

In 1913 Holms got into financial difficulties and had to halt his building programme and sell off much of his treasured art collection. By this time he was living in one of the completed buildings on the estate and the landscaped grounds with pasture, wooded areas and gardens were much as we see them today. The mansion house itself had been roofed, but much of the internal building work was never fully completed. However, although he never lived in the house, Holms on numerous occasions held dinner parties for his friends in the half-finished mansion house.

When Holms died in 1938 the estate was sold to A.E.Pickard, a business genius and eccentric millionaire. During the Second World the mansion house and estate were requisitioned by the military. Subsequently, the buildings fell into a state of disrepair. Holms’s dream was saved in 1988 when Kit Martin began the restoration and conversion of the mansion house and estate buildings into the seventeen dwelling houses on the estate today.